The Truth of War

A huge part of me understanding the truth of war was hearing from the veterans. The perspective and voice that they provided both inspired me and gave me a huge newsflash. The veteran that spoke to our class gave such a raw opinion on the Vietnam War and how he and other people were affected. Writing the Gulf of Tonkin essay was another thing that helped me realize the truth of how the U.S. was involved in Vietnam. Gathering evidence and using critical thinking skills made me aware of all sides involved. “The Things They Carried” was an emotional and brutally truthful view on the Vietnam War, I felt inspired by the stories told in the book, they added a whole different point of view to this project.

​Although this project required me to utilize many different skills the most important things that I ended up using were critical thinking and artistic skills during this project. The Gulf of Tonkin timed write required me to think critically and use evidence provided in an effective and convincing way to my readers. I also had to use critical thinking skills to understand some of the other readings we did in class, such as the telegrams and articles that were handed out. I strengthened my artistic skills because my original vision didn’t come together, because of this I had to use artistic skills effectively to create an art project I was still proud of.

An enduring understanding I am taking away from this project is that truth in war comes from first person experience. The veteran visit and “The Things They Carried” book were two very influential first person inputs about the war that I was lucky to have access to. Movies, fictional stories, and music can be influential but it is so impactful when you hear from someone who experienced every part of the war as an individual. Hearing from the veterans about what it was like to be drafted, to have friends killed in the war, and their individual opinions on the war itself taught me so much about the war and its influence on individuals in the war. 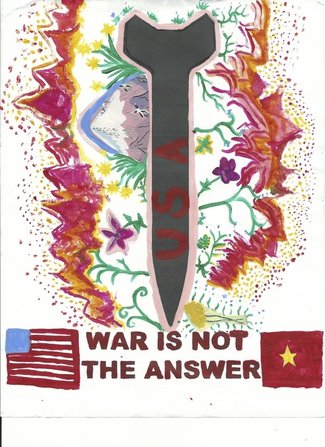